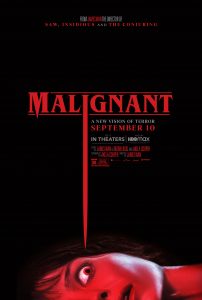 Given the overlong, deadly serious nature of the story’s slow-paced, dreadfully dull, cliché-ridden buildup, I soon found myself watching the clock, waiting for this one to end and wondering what additional tedium I’d be subjected to in the concluding sequence. Much to my surprise, however, the film actually gets better in its end run by turning into a gloriously campy romp that had me in stitches the rest of the way. In fact, that drastic change in tone made me wonder why director James Wan hadn’t handled it as such all the way through from the beginning; it would have made for a much, much better film. However, the picture’s initial attempt at being “serious drama” falls flat on its ass and only gets better when it decides to take itself far less seriously. In the interest of full disclosure, I should add that I’m not much of a horror movie fan, because I find it’s an art form that’s truly difficult to do well, with most contemporary offerings falling prey to material that’s not especially scary or descending into gore fests aimed at seeing how high the body count can get. With some retooling, this one might have succeeded at doing something distinctly different and genuinely entertaining. But, as it stands now, this is destined to become a midnight show cult classic that’s probably best watched blitzed out of one’s mind.