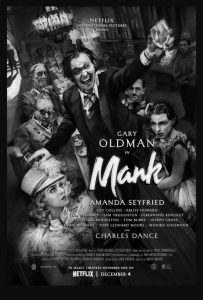 Actor-director Orson Welles’s epic “Citizen Kane” (1941) is considered by many to be one of the greatest (if not the greatest) film ever made, but it may never have achieved that distinction without the superb script penned by screenwriter Herman “Mank” Mankiewicz. In director David Fincher’s latest, the filmmaker tells the colorful back story examining how the Oscar-winning screenplay came together, a lavish old Hollywood-style production with all the trimmings, gorgeous black-and-white cinematography, and a slate of stellar performances, including those of Gary Oldman, Amanda Seyfriend, Arliss Howard and Charles Dance. Nevertheless, one can’t help but wonder why anybody should care about a picture like this; unless one is a diehard classic movie buff, a Welles aficionado or a student of 1930s left-wing politics, “Mank” may not have much to offer the average moviegoer, especially with the film’s many inside (and unexplained) references to these subjects, its ample “Kane” trivia and the details of the lives of those who inspired its storyline. This is by no means a bad picture (though it is a little slow to get started), but it may prompt many to wonder about its reason for being – and leave them pining for Mankiewicz’s handiwork instead.