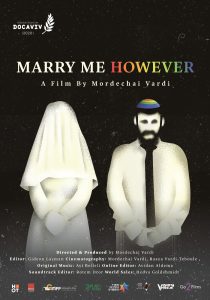 Most of us would probably agree that marrying against one’s will for the sake of rules and appearances is destined to fail. So it has been for a number of gay Orthodox Jewish men and women who obediently followed the “advice” of their religious leaders by marrying and having children in full knowledge of their true sexual orientation. But what happens when those relationships eventually dissolve? That’s what Mordechai Vardi’s fine documentary explores through interviews with formerly wed gays and lesbians, their onetime partners, and the religious leaders who advised them and others facing similar circumstances. While the film is somewhat on the short side at a scant 63 minutes, it nevertheless evokes an array of emotional responses, from sadness and sympathy for those left behind to supportive joy for those who had the courage to take their next step to angry indignation over the bestowing of bad advice to those who truly knew better and turned a blind eye. Most of all, though, the film encourages all of us to find our own answers for our lives rather than blindly follow the ill-conceived recommendations of those seeking to preserve outdated attitudes simply for the sake of preserving an antiquated status quo.