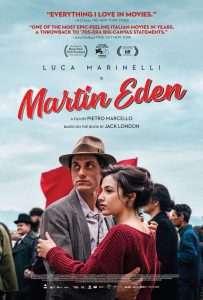 Loosely based on author Jack London’s 1909 novel of the same name, this Italian adaptation struggles to find its footing with an overly intellectualized narrative that attempts to fuse sociopolitical discussion with the merits of self-education and personal growth and development. Set in an indeterminate time in Italy’s history (though the 1970s would be a good guess), the film follows the odyssey of an angry young working class man with minimal schooling who seeks to improve himself and rise above his social status by ravenously reading and pursuing a writing career after meeting a bourgeois love interest. It’s a process that gradually turns him into an angrier young man when his vocational pursuits don’t pan out, leading to personal dissatisfaction, unwitting political turmoil and the dissolution of his forbidden romance – all of which ironically lead to his surprise recognition as a gifted scribe, unexpected success and a new round of individual disillusionment. While the film is modestly interesting in the first half, it gradually starts to fall apart thereafter before completely losing it in the incoherent, overly dramatic final act. Don’t let the lavish praise heaped on this offering fool you. This one is vastly overrated, to be sure.