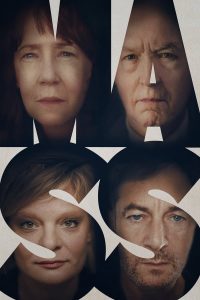 It’s hard to imagine that a film consisting almost exclusively of dialogues and monologues can make for a compelling watch, but such is the case with writer-director Fran Kranz’s debut feature. When two couples impacted by a terrible tragedy seek to work through their feelings during a meeting held in the conference room of a community Episcopal church, their conversation opens many doors that have long been closed, releasing a deluge of raw emotions while simultaneously paving a path to healing. Although the film starts off slowly and somewhat clumsily (probably by intention but not especially effectively), it soon finds its voice and manages to captivate from that point forward. Credit the film’s carefully crafted screenplay, solid camera work and skillful editing for making engaging  viewing out of material that might otherwise be considered dull and talky. But the picture’s greatest asset is the stellar acting of its four principals – Ann Dowd, Martha Plimpton, Jason Isaacs and Reed Birney – who turn in riveting performances that stand out both individually and collectively. It’s unfortunate that this offering has not garnered the kind of recognition it deserves (most likely due to its anemic distribution and a lack of publicity), but it has been receiving ample critical acclaim and well-earned awards season accolades. Thankfully, this moving and powerful release shows that a movie doesn’t need to rely on endless explosions and high-powered special effects to capture and maintain viewer interest while delivering profound insights into the human mind and heart.