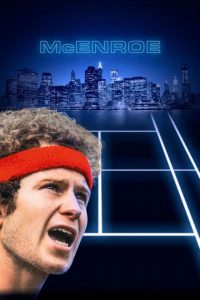 Anyone interested in learning about the perils of perfectionism should check out this insightful documentary about legendary tennis star John McEnroe, the most successful player ever in men’s singles and doubles competition. As writer-director Barney Douglas’s new Showtime documentary poignantly reveals, for all of McEnroe’s success, he was never satisfied with his accomplishments, a product of an upbringing in which he was perpetually pushed to be the best and came to look upon himself as a failure for anything less than perfection. Placing so much pressure on himself led to his infamous ornery streak and caused him to become known as the argumentative bad boy of the tennis world, both on the courts and in his dealings with the media. That reputation carried consequences outside the sport as well, including his hearty partying ways and troubled relations in his romantic and family life, issues that, in turn, caused his game to suffer. But those challenges eventually prompted some intense soul-searching that forced him to examine the entire spectrum of his life, both in the areas in which he had become overly obsessed and those that he regrettably neglected. Admittedly, some aspects of the storytelling are presented in somewhat overly pretentious ways, but, fortunately, these elements don’t unduly impinge on the overall narrative. But this shortcoming is made up for by the picture’s ample archival footage, as well as its telling interviews with tennis stars Billie Jean King and Björn Borg, McEnroe’s family members, and his playtime buddies, rock stars Keith Richards, Chrissie Hynde and Patty Smyth, his current wife. The result is a surprisingly in-depth look at an athlete’s life, a production that goes far beyond what many sports documentaries achieve, let alone attempt. Advantage viewers.