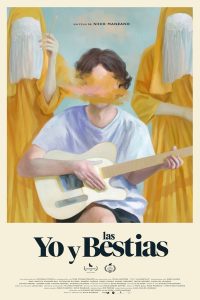 Though billed as a deadpan comedy, director Nico Manzano’s debut feature prompts few laughs and leaves viewers mostly perplexed as to its message, purpose and intent. In telling the story of a musician who quits his band over performance schedule disagreements to pursue a solo career, the film follows his frustrating exploits in trying to establish himself. Artistically, he feels fulfilled with the music he’s composing, thanks in large part to the assistance of a pair of oddly dressed “beasts” (though “muse” would probably be a more fitting word choice). However, when it comes to bringing his creations to market, he runs into constant roadblocks, some brought on by poor choices, some due to the corrupt business practices and government policies in place in the downward spiraling Venezuelan economy. The result is a mix of hopefulness and frustration that keeps him from reaching his potential. Regrettably, the picture itself never reaches its potential, either, keeping viewers at bay with clumsy narrative and screenplay choices that generally just don’t work. It feels at times as if the film is an underdeveloped feature, while at other times it comes across as a padded short, filled with far too many incidental, extraneous story elements and awkwardly orchestrated pacing that’s tediously protracted. Its attempt at social allegory falls flat, too, never developing this aspect of the story as clearly and compellingly as it might have. In fact, perhaps the only saving grace here is the music itself, which is often totally mesmerizing; indeed, a concert film of the picture’s original compositions would probably have been far more preferable to what the filmmaker has come up with. In the end, a complete retooling is in order here to make its story and symbolism more engaging, entertaining and tolerable.