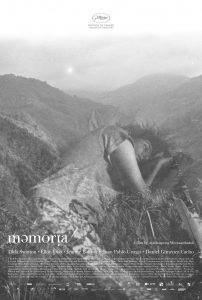 It reaches…and reaches…and reaches…yet its grasp never attains fulfillment, leaving viewers feeling as though they’ve been toyed with for more than two hours for a payoff that’s only modestly satisfying at best. Director Apichatpong Weerasethakul’s latest has its moments of visual and audio appeal, but its protracted, heavily padded, thin and meandering narrative and half-baked character development is a frustrating follow for even the most patient of viewers. Its exceedingly tiresome still shots (of which there are many) alone push audiences to plead for getting on with it already. Those well-versed in the paranormal and metaphysical will find this an especially tedious watch, given that what the filmmaker is going for is apparent quite early on, yet the picture leaves its spectators haplessly bound to sit through the flotsam that leads to a conclusion with few surprises and little satisfaction. “Memoria” has somehow found a fan base among the art house crowd, but, to be blunt, lofty pretention and contrived artistry do not translate to profound insight, and that’s an overinflated balloon desperately in need if being popped. And none of this takes into account the peculiar distribution plan that has accompanied this picture’s release, one that has made it extremely difficult to screen this one in the first place (though, given the result, maybe that’s a good thing). Indeed, how this one managed to walk away with awards like the Cannes Film Festival Jury Prize and the Chicago Film Festival’s Gold Hugo for Best Feature is truly beyond me. And to think I was actually looking forward to seeing this for months.