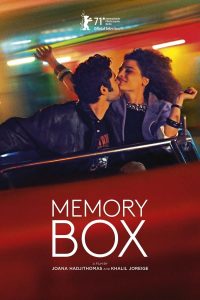 When we think we know someone but subsequently find out we don’t know that individual at all, the impact can be surprising, if not disillusioning, especially when it involves someone close, like a family member. That’s the experience of a young Canadian woman of Lebanese descent who discovers her mother is not the person she thought she was. It’s a revelation that comes about when her mother receives a package filled with memorabilia from her upbringing in Beirut during the 1980s Lebanese Civil War, a time of devastating trauma mixed with a wondrous coming of age experience. Mom is not anxious to review the contents of the box, despite the many questions posed by her daughter regarding the stockpile of notebooks, photos and cassette tapes contained therein. She even goes so far as to forbid her daughter from reviewing the materials or asking about them, an order that’s promptly and secretively ignored. By reading the journals, looking at the pictures and listening to the recordings, she discovers things about her mother that she never knew – tragedies she experienced, passions she possessed but has since abandoned, secrets about her extended family and loves lost – events that changed her mother drastically from the person she used to be in her youth. And, when mom learns that her daughter has been clandestinely perusing these materials, it sets up a confrontation, a dialogue and a metamorphosis that neither of them previously saw coming. In their fourth narrative collaboration, directors Joana Hadjithomas and Khalil Joreige have produced an engaging film that captivates throughout, capably nurturing the level of suspense and zapping viewers with carefully crafted, intensely moving disclosures, followed by moments of heartbreak, rebirth and encouragement. Despite a slight tendency to drag a bit toward the end of the first hour, “Memory Box” deservedly earns the interest it garners and the emotions it evokes across a wide spectrum of feelings, all told through a story that takes place during a period in history that has previously received precious little cinematic attention. This one is well worth a watch.