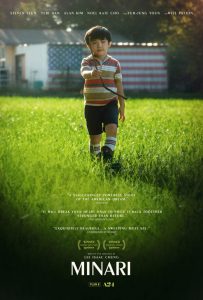 This is the movie that should win the Oscar for best picture, flat out, hands down, no questions asked. Director Lee Isaac Chung’s heartfelt domestic drama about a South Korean immigrant family seeking a fresh start and a better tomorrow in 1980s rural Arkansas is just the kind of movie that we need right now, much as “Moonlight” was the film we needed in 2016. The picture’s exquisite cinematography, nuanced script and narrative, and superb ensemble cast make for a moving cinematic experience that leaves viewers with a warm glow that lasts long after the movie’s final frame. Richly deserving of the many accolades and award nominations it has received thus far, “Minari” truly stands out among this year’s field of contenders, masterfully and lovingly handled in virtually every respect. I can’t speak highly enough about the quality of this film and its power to help heal an ailing nation.