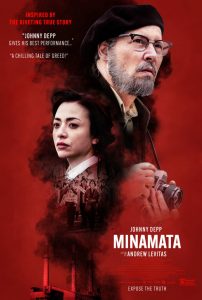 No matter how old and detached we may become, it’s never too late to redeem ourselves, especially in the name of a just cause. So it was in 1971 for acclaimed wartime photojournalist W. Eugene Smith, who had fallen on hard times and faded from the public eye, despite his many accomplishments. However, when an opportunity arose to go to Japan on assignment for Life magazine to document the suffering of residents of the fishing village of Minamata, whose waters had become poisoned with mercury and caused many to fall ill over a course of 15 years (a sickness that had come to be known as “Minimata disease”), he jumped at the chance to cover an ongoing uncontrolled tragedy that had been significantly underreported. This fact-based film thus follows Smith as he seeks to expose the acts of a powerful and corrupt corporation attempting to duck its responsibilities while battling his own personal demons, undertakings that offer the possibility of redemption on both fronts. In doing so, director Andrew Levitas presents viewers with a classic “issues film” much in the same vein as “Erin Brockovich” (2000) and “Dark Waters” (2019), focusing on the personal angle of this catastrophe, showing its impact on the protagonist and victims in graphic yet heart-tugging terms. Admittedly, the tone can be somewhat heavy-handed at times, but this is compensated for by the picture’s gorgeous cinematography, its superb Ryiuchi Sakamoto background score, and the fine lead performance of Johnny Depp, who turns in some of the best work he’s done in years. Indeed, despite the film’s tendency to preach, its message is nevertheless important – one that probably can’t be overstated in light of its impact and magnitude (and as only one example of many such ecological disasters that have occurred globally, as depicted in a montage of comparable events shown over the closing credits). This is genuinely something we must all remain diligent about, and, thankfully, that cause can be furthered by efforts like those shown here, reminding us that this planet is our home and deserves the kind of protection and respect that so many others are willing to deliberately ignore.