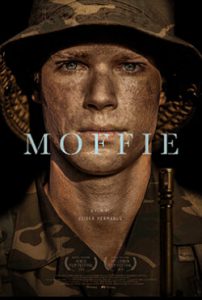 When a closeted gay South African teen (a “moffie” in local derogatory lingo) is conscripted into the military in 1981 to fight encroaching Angolan communists and to enforce the nation’s existing apartheid laws, he’s not sure how to handle himself. And, unfortunately, neither is director Oliver Hermanus when it comes to telling his story. The film’s seemingly solid and ironic premise – that of someone in a persecuted community having to enforce legally sanctioned discriminatory policies against members of other persecuted constituencies – should have been enough in itself to drive the narrative of this offering. However, Hermanus frequently goes off point (and, in turn, off the rails) in examining other less engaging tangents, drawing attention away from what should have easily made this picture work best. Odd editing, an inconsistent use of flashbacks, a patchwork of incompatible camera techniques and an almost-corny soundtrack don’t help matters, either. To the director’s credit, he does a credible job of presenting the extremes of emotion that men are capable of, from horrifically barbaric to eminently sensitive and caring, in large part through homages to movies like “Full Metal Jacket” (1987) and “Brokeback Mountain” (sans cowboys) (2005). But, these few strengths aside, “Moffie” is a major disappointment, and that’s regrettable, as this BAFTA-nominated release was something I was truly looking forward to.