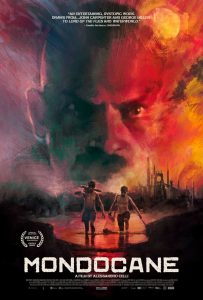 In a world of the future characterized by environmental degradation, rampant brutal crime, out-of-control gang activity, and an ever-widening gap between haves and have-nots, life is a struggle for those who’ve been left to fend for themselves. Such is the case for a pair of Italian teenage street urchins living by their wits to survive. They have few choices, and most of them aren’t good. And, as their story unfolds, matters tend to go from bad to worse. These are the circumstances graphically depicted in director Alessandro Celli’s allegorical debut narrative feature, whose story realistically could be as much about the present as it is about what’s to come. Because of that, this cautionary tale that echoes elements of “Blade Runner” (1982) and the “Mad Max” franchise isn’t especially revelatory but serves more as yet another reminder of where we’re headed as a civilization if we don’t take steps to stop it, one that will probably be seen more as an action-adventure entertainment vehicle than a statement meant to be taken as a warning. The picture’s tendency to meander, its lack of narrative specifics in some regards and its incomplete resolution of several story threads don’t help, either, despite the screenplay’s noteworthy introduction of a number of intriguing concepts and characters. The bottom line here is that this release could have used some script tweaking and tighter editing to make for a better offering – and it’s truly unfortunate that these measures weren’t implemented.