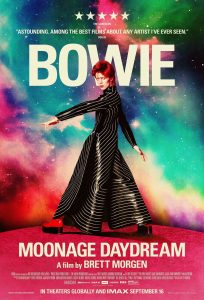 Encapsulating, while simultaneously doing justice to, the life and work of a prolific and consummate artist like David Bowie is no easy feat. Sufficiently taking account of the extensive repertoire of this iconic musician/writer/painter/actor in a single film – even one that runs more than two hours – is a gargantuan undertaking just to include what Bowie did, let alone examine how and why he did it. But writer-director Brett Morgen has done just that – and succeeded brilliantly – in his latest cinematic offering, combining elements in a way that paints an insightful picture of the multifaceted artist, presenting viewers with an engaging, entertaining and introspective profile of this enigmatic and captivating talent. Morgen tells his story through Bowie’s own words, culled from numerous interviews and media appearances over the years. This material is augmented with stirring concert and music video performance footage, clips from the actor’s movie and stage appearances (including such works as “The Man Who Fell to Earth” (1976), “Just a Gigolo” (1978), “Merry Christmas Mr. Lawrence” (1983), “The Hunger” (1983) and “Labyrinth” (1986), as well as his 1980 Broadway turn in “The Elephant Man”), and an array of imagery from other artistic and cinematic sources that enhance themes prominent in Bowie’s works and the periods when they were released. The film features am impressive wealth of musical numbers, including moving performances of staples like Heroes, When You Rock ʼn Roll with Me, Space Oddity, All the Young Dudes and a heartfelt rendition of Word on a Wing (accompaniment for Bowie’s sentiments on his endearing relationship with model/actress Iman), along with several lesser-known works and impromptu collaborations with world musicians. In incorporating all this, some have criticized the picture’s length, but, when one considers just how much there is to cover, how can a filmmaker justifiably impose a shorter duration simply because the production may try the attention span of a few impatient viewers? That seems like a petty quibble in light of everything this release has to offer. That’s especially true when one realizes that this combination serves up a portrait of Bowie unlike others about him and those of other artists of his stripe, boldly setting this film apart from other biographies of this kind. It is by far the best documentary I’ve seen so far this year, if not one of the best films overall that I have screened in 2022. Fans and followers of Bowie are sure to enjoy, even be moved, by this offering, one that raises his artistic profile (and, one would hope, the level of appreciation he justly deserves) for the diversity and depth of his body of work, something that’s bound to become more widely recognized in the years to come.