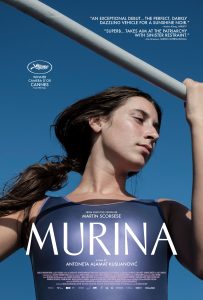 Adolescence is a time for finding oneself, especially when it comes to our sense of personal power. That’s rarely easy, but it can be especially difficult for a teenage girl trapped in a household with a chauvinistic father, a condition not uncommon in many traditional Eastern European households. Such is the fate of a quiet but independently minded Croatian adolescent who longs for freedom from under the thumb of her domineering dad and capitulating mother. But the potential for profound change arises when a wealthy old friend of her father pays a visit to their coastal fishing village, one that could transform her life and that of her mother, provided they have the courage to act on it. Director Antoneta Alamat Kusijanović’s debut feature from Executive Producer Martin Scorsese presents an intense, intimate character study of an individual’s search for empowerment in the face of oppressing odds and confusing circumstances that, like the clandestine behavior of the moray eels she and her father routinely hunt, deceptively conceal much of what’s actually going on. This winner of the 2021 Cannes Film Festival Golden Camera Award for best first feature simmers slowly but builds tension well, engaging viewers handily, despite some repetitive narrative elements and occasional “atmospheric” camera work whose deliberate murkiness goes a little overboard in metaphorically depicting the intended character of the story. A number of films with themes similar to those explored here have emerged from this region in recent years, such as “Hive” (2021) and “God Exists, Her Name is Petrunya” (2019). That’s an indication that there’s a need for the expression of these notions, and, thankfully, filmmakers have successfully risen to the occasion, making the world more aware about conditions for women desperately in need of reform.