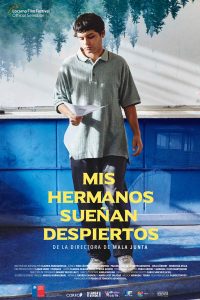 When two teenage brothers are confined in a Chilean provincial juvenile detention center, they dream of life outside their prison walls, although they have no idea when they’ll have the opportunity to experience it. Despite being charged with only petty offenses, they have no legal guardian to claim them, their mother having abandoned them upon lockup. With the days passing, the tedium growing ever-more exasperating and the stress mounting (particularly for the younger, more sensitive sibling), the brothers become progressively more frustrated – and desperate – to find a way to rejoin the world of the living. So, when an opportunity opens up to make that happen with their cell mates, they avail themselves of the chance, despite the risky nature of the plan. Based on conditions that once existed at one such facility, as well director Claudia Huaiquimilla’s experience working with at-risk youth, this sensitive, affecting drama puts viewers into the shoes of these troubled young men and women, many of whom didn’t catch any breaks before incarceration let alone once in confinement. Because the film touches on so many different aspects of juvenile detention life, it occasionally suffers from bouts of meandering and underdevelopment. But this is made up for by a fine ensemble cast, beautiful cinematography and a riveting concluding sequence that will leave viewers glued to their seats. The filmmaker’s sophomore effort isn’t always an easy watch, but it nevertheless makes a powerful and profound statement that bears heeding, no matter where one calls home.