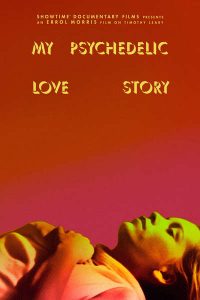 To paraphrase the Grateful Dead, “What a long strange trip it was” (emphasis on the word “long”). Director Errol Morris’s protracted Showtime TV documentary about Joanna Harcourt-Smith, LSD guru Timothy Leary’s so-called “perfect woman,” tells the story of their time together at the height of the psychedelic era, including their globe-trotting days on the run from authorities to evade capture for drug law violations. While some of Harcourt-Smith’s stories are indeed entertaining and colorful, many of them ramble on endlessly, leaving viewers wondering if they have a point – or a conclusion. Meanwhile, others are so outlandish that they stretch credibility and come across more like tall tales, a possibility that’s not entirely improbable given Harcourt-Smith’s own admission to having been a chronic liar in her youth. Ultimately, though, much of this film just isn’t particularly interesting, a collection of essentially insignificant anecdotes that don’t shed any revelatory light on the principals, the era in which they lived or their legacies. It seems like this material could have provided rich fodder for an engaging picture, but it instead presents little more than a name-dropping counterculture tell-all, the kind of story swapping to come out of a conclave of aging hippies.