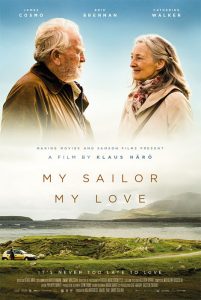 When a retired, curmudgeonly, self-centered Irish sea captain has trouble caring for himself, his overprotective, controlling daughter hires a new housekeeper to tend to his needs, a move the fiercely independent protagonist initially resents. However, before long, the once-tentative relationship blossoms into something more substantial, a move the skipper’s daughter questions and grows to resent. So how will this fundamental dilemma be resolved? That’s the central question raised in director Klaus Härö’s latest effort, a well-crafted, if occasionally predictable, romantic drama reminiscent of the similarly themed “Nobody Has to Know” (2021). Set against the sweeping Irish seacoast, this beautifully photographed backdrop provides the perfect stage for this heartfelt saga, one that verges on a tearjerker at times but never slides into a sappy, melodramatic, manipulative hanky fest. In large part this is due to the restrained but powerful performances of James Cosmo and Brid Brennan, who keep their characters real without becoming sentimental, histrionic caricatures. Add to this a finely polished soundtrack, and you’ve got a quality cinematic offering that deserves a look for a variety of reasons.