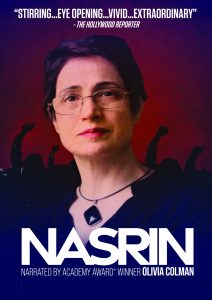 “Courage under fire” is an expression that could best be used to describe Iranian human rights lawyer Nasrin Sotoudeh. The lion-hearted attorney has defiantly taken on a variety of cases defending women, children, religious minorities, persecuted artists and outspoken political reformers against overblown charges brought by a fundamentalist government regime seeking to suppress opposition at any cost, including instances involving blatant illegality, unethical conduct and outright lying. And, for her efforts, she has gained international notoriety but at a cost to herself, including imprisonment and physical torture. Director Jeff Kaufman’s superb documentary look at Nasrin’s heroic life chronicles the many challenges she has faced while unflinchingly depicting the stalwart defiance she has demonstrated in the face of odds frequently stacked against her. The filmmaker also candidly yet sensitively illustrates the counselor’s human side – her family life, her involvement in the arts community, and the heartfelt compassion she genuinely feels for her clients and causes – proof of the authenticity guiding her actions. Clandestinely shot in Iran under the threat of prosecution and narrated by Oscar winner Olivia Colman, “Nasrin” paints a truly remarkable portrait of a truly remarkable individual.