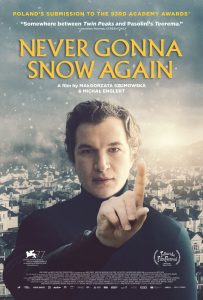 When an enigmatic massage therapist/hypnotist from the Chernobyl area of Ukraine shows up in an upscale Polish gated community, he miraculously attends to the healing of an assortment of residents with varying physical and emotional needs. But who is he really, especially in light of his special powers that make him seem like a subdued but otherworldly superhero? That’s the gist of this atmospheric tale from directors Malgorzata Szumowska and Michal Englert, which seamlessly weaves drama, science fiction and delightful humor in a modestly intriguing story, thanks in large part to the fine lead performance of Alec Utgoff. However, despite an engaging premise, captivating back story and colorful supporting characters, the film’s deliberate ambiguity gets stretched quite thin after a while, leaving viewers wondering exactly where this film is going, with a concluding payoff that’s somewhat less than satisfying. As a vehicle that seems quite self-satisfied with itself for its beautifully filmed but nevertheless cryptic nature, the filmmakers have left the audience somewhat in the dark with some of their meandering, underdeveloped and unexplained narrative choices. The result is a film that probably should have gone through an additional round of script changes and final edits before being released, alterations that would have made for a much more satisfying picture.