‘News of the World’ 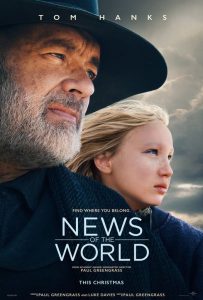 “News of the World”

Though beautifully filmed, well acted by Tom Hanks and Helena Zengel, and occasionally touching, this modestly engaging Western about a former Confederate soldier seeking to deliver an orphaned young girl to her surviving relatives never quite captivates due to slow pacing, episodic storytelling, underdeveloped characterization and predictable sentimentality. As a touring reader of news stories to local settlers, the onetime military man functions like a traveling newsfeed, relating information from newspaper articles that often stirs up emotions among the locals, a less-than-veiled allegory about contemporary media outlets (and one of the more interesting aspects of the story that, unfortunately, doesn’t get as much attention as it probably deserves, especially since it provides the basis of the picture’s title). All in all, this seems like a half-baked effort that didn’t pan out as hoped for, often missing the mark for what it should have been focused on and delivering an overall underwhelming finished product.