‘Night of the Kings’ 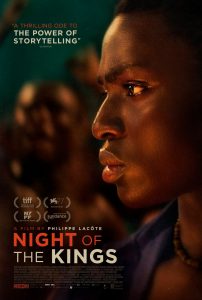 Stylish though it may be, this drama/fantasy about a storytelling ritual carried out in a remote prison ruled by inmates in the Ivory Coast wilderness definitely, definitely, definitely loses something in translation. Director Philippe Lacõte’s third narrative feature is difficult to follow, largely because much of the material goes unexplained, save for superficial descriptions of the events on screen but with virtually no back story. What’s more, it seems assumed that viewers somehow naturally possess an intimate knowledge of African mythology and the political history of the Ivory Coast going in, a rather sizable (and unfounded) presumption on the filmmaker’s part, to be sure. The convoluted mixture of drama and fantasy, along with sketchy details about the ritual and the workings of internal prison politics, frequently leaves viewers scratching their heads, wondering about what is really going on. Add to that a host of seemingly impromptu, perfectly choreographed outbursts of song, dance and acrobatics from those listening to the storyteller – most of which resemble bad experimental theater – and you’ve got a confusing tale that ultimately seems indifferently pointless (especially since the narrative of the story being told isn’t particularly interesting in the first place). What this production clearly shows is that there’s a big difference between creativity and coherent creativity, and, sadly, “Night of the Kings” does not reflect the latter.