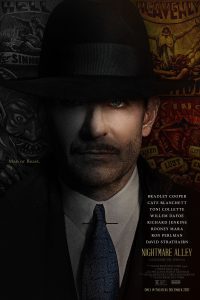 Though stylish to a fault, director Guillermo del Toro’s cinema noir tale about a Depression Era carny worker who hones his mentalist craft on the humbug circuit and then uses it to fleece gullible, wealthy members of high society has the makings of what should be a captivating watch. Note that I said should be. Unfortunately, this vastly, vastly overlong offering waters down its suspense to the point where the end can’t come fast enough. A bloated script and insufficient editing heavily weigh down this misfire, which, despite its length, ironically somehow manages to come up short in the back story department. To its credit, “Nightmare Alley” is one of the most beautiful films of 2021 with its lavish production design, gorgeous cinematography and fine technical attributes. It also features a superb ensemble, with fine performances across the board, particularly those of Cate Blanchett, Willem Dafoe, David Strathairn and Richard Jenkins. But even those considerable strengths are not enough to save this protracted snooze, one that truly would have benefitted from a thorough going-over in the script and editing areas to mercifully chop out a plethora of extraneous, irrelevant material. Indeed, putting one’s audience to sleep when they should be on the edge of their seats is no way to handle a film in this genre, an approach that, sadly, is deadlier than anything happening on screen.