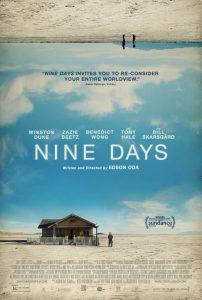 Adequately expressing the expansive nature of existence in all its various permutations is far from an easy feat in any artistic milieu. But director Edson Oda has done a more than commendable job in his debut feature about an other-dimensional case worker who spends nine days interviewing aspirants to fill a vacancy that’s become open in physical reality. It’s an intense experience that tests the character of the candidates, as well as that of the interviewer himself, a once-incarnate being who has mixed feelings about his corporeal existence (and has no apparent desire to return to it). The narrative thus provides viewers with a metaphysical tango in which facilitator and students end up becoming mirrors for one another and where they unwittingly switch roles in teaching and learning life lessons, no matter what reality those instructions may ultimately be applied to. While the narrative is occasionally a little too elusive for its own good, all is gradually and eventually revealed, making for an exceedingly thought-provoking cinematic and philosophical experience. The picture’s minimalist but inventive production design, innovative editing and fine performances (particularly those of Independent Spirit Award nominee Benedict Wong and protagonist Winston Duke, who reveals acting chops most viewers probably never realized he possessed) combine for an intriguing and insightful tale, one that will have audience members talking about at length afterward. This little-known indie gem is a must-see for those who appreciate cinema that’s both entertaining and enlightening and who like to leave the theater with something to ponder long after the flickering on the screen stops.