‘No Straight Lines: The Rise of Queer Comics’ 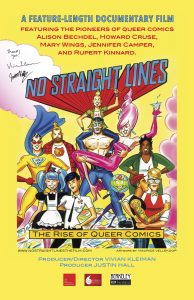 “No Straight Lines: The Rise of Queer Comics”

Though they may have once been considered fringe – even subversive – gay comics have evolved over the years from underground publications sold in head shops and erotic bookstores to respected, albeit provocative, works of art. Director Vivian Kleiman’s excellent new documentary takes a detailed survey look at the history of this genre of comics, some of its notable artists, and the private and public influences that inspired them and their work. What’s most revealing is the diverse range of subjects addressed in these works, from all forms of homoeroticism to gay causes like equal rights and the AIDS crisis to the impact of transcendent social, political and cultural influences on the LGBTQ community. This offering may not be for those outside its core constituency, but comic book fans and the member of the gay community are sure to find it entertaining and informative.