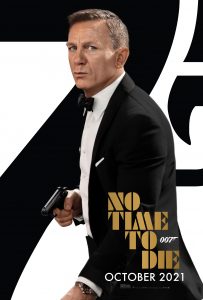 Predictable, loquacious and far too long, this latest installment in the James Bond franchise and Daniel Craig’s swan song in the lead role is a major disappointment given all the build-up. While the film is to be admired for trying to do something more with the character than what was done in many of its predecessors, it unfortunately gets bogged down in these attempts at adding depth and substance, resulting in a number of talky sequences where viewers are wont to exclaim “Get on with it already!” With this being Craig’s final turn as 007 and with this film marking the franchise’s 25th installment milestone, the picture often plays like a collection of “Bond’s greatest hits,” incorporating numerous references to past characters, incidents and even dialogue that seem to serve little purpose other than conveniently working them into the story for nostalgic good measure. Also, an unoriginal plot, a mismatched set of narrative vibes, the underutilization of certain cast members (most notably Rami Malek as the villain who’s often treated like an afterthought), and the failure to employ the franchise’s signature action sequences and technological gimmickry to any great degree weigh this effort down even further. Director Cary Joji Fukunaga’s contribution to this legendary film series definitely comes up short of expectations, especially in light of the much anticipated build-up it received as a result of its protracted pandemic-delayed release. Indeed, if this is what we’ve been waiting for all this time, regrettably, it truly doesn’t measure up to the hype.