‘Nobody Has to Know’ 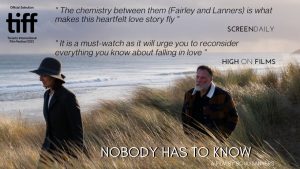 “Nobody Has to Know”

What if you were to lose your memory and then have an apparent stranger come up to you and say that the two of you were once lovers? Would you believe it? And what would you do? That’s the challenge for a stroke survivor who learns that his caregiver was once supposedly a love interest. It’s not as if he’s opposed to the idea of picking up where they supposedly left off, but he nevertheless remembers nothing of his involvement with her. Thus begins the start of an unusual relationship that he clearly enjoys despite the seemingly omnipresent nervousness she appears to exude. Is everything above board here? Or is something else going on, and how will that bode for their future? Writer-actor-director Bouli Lanners has concocted quite an engaging story in this film, successfully brought to life by his fine performance and that of co-star Michelle Fairley, both of whom captured CIFF Silver Hugo Awards for their portrayals. Admittedly, a few story elements don’t integrate into the overall narrative as well as they could, but the picture’s gorgeous cinematography provides an excellent distraction to these modest drawbacks. As one of the most unusual love stories I have ever seen, this offering generally lives up to its potential and gives the heartstrings a good tug in the process.