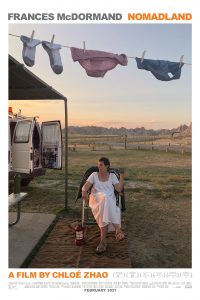 This inside look at a little-known community and culture is engaging for about the first two-thirds of the film, but, in the end run, it begins to grow tiresome, leaving viewers wondering when and how it will ever end. Director Chloe Zhao’s third feature offering is a notable improvement over her first two outings, but she still needs to refine her craft further to produce the kind of masterpiece she’s likely capable of. “Nomadland” is a big step in that direction, serving up a heartfelt tale about the American nomadic community and its unconventional followers’ love of the freedom it affords, set against the beauty of the country’s landscape, depicted here through stunningly gorgeous cinematography. However, the inherent meandering of the protagonist ultimately gets taken a little too far in the film’s narrative and could have been trimmed without losing anything. The much-heralded performance of Frances McDormand is adequate but far from the kind of stellar work she’s capable of, probably due to the understated nature of her character, a casting decision that maybe should have been reevaluated before filming began. While I can honestly say I liked this film, I can also honestly say that I didn’t love it, either. Maybe the fourth time will be the charm for Ms. Zhao.