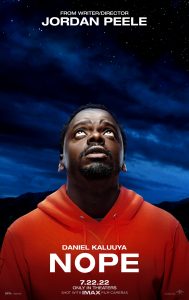 As much as I hate to say it (and at the risk of parroting what a number of other critics have already said), the title of writer-director Jordan Peele’s latest pretty much sums up the film. After brilliant career starts with “Get Out” (2017) and “Us” (2019), this rising star in the world of filmmaking has lost his way with this one. While I didn’t exactly hate the picture, it underachieves what this director is capable of. Its fairly simple premise is far too stretched out, padded with material that’s somewhat predictable and adds little to the development of the overall narrative. What’s more, the film lacks much of the humor and signature fright moments that characterized the filmmaker’s previous two works, coming across as flatter than those pictures. Add to that some plot devices that don’t make sense, a big reveal that comes far too early on in the film, a sleepwalking performance by lead Daniel Kaluuya, a failure of the director to “kill his darlings” and a lack of any appreciably new insights into the phenomenon of ufology, and you’ve got a mix that, sadly, just doesn’t cut it compared to Peele’s established track record. Personally, I’d recommend that prospective viewers wait until this one comes out on cable or streaming services; there’s no need to plunk down full theatrical prices for this disappointing offering.