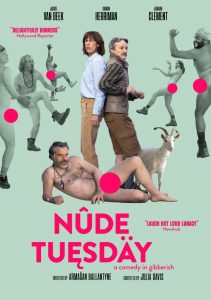 A sophisticated silly sex comedy might sound like a contradiction in terms, yet that’s precisely what this hilarious release from Down Under is all about. Director Armağan Ballantyne’s second feature follows the raucously funny misadventures of Bruno and Laura, a middle-aged suburban couple whose bedroom activities have noticeably stagnated, a development that has significantly affected the quality of their relationship, as well as other aspects of their daily lives. So, to help them get things back on track, they reluctantly attend an erotically focused couples retreat, an unexpected anniversary gift from Bruno’s unapologetically outspoken mother. There the unwitting uptight new arrivals encounter a self-absorbed whacked out sex guru, an array of eccentric, uninhibited disciples, farm animals trotted out to provide sensual “inspiration,” and an assortment of outlandishly sidesplitting group exercises that positively slay libidinous group encounters and wilderness New Age gatherings. To top all this, though, the film’s dialogue consists of complete gibberish, symbolic (and symptomatic) of the profound miscommunication between the protagonists, who habitually talk past one another. “Translations” of what’s said are provided with English subtitles penned by a team of writers who’ve been given license to drum up lines that push humor boundaries (and that successfully manage to come across a lot funnier when read than spoken). This even carries through in the picture’s musical interludes, which feature gibberesque lyrics to songs like “Sea of Love” and, quite fittingly, the Talking Heads’ “Road to Nowhere.” Admittedly, the film starts to run out of gas in the final half hour, and its otherwise-frenetic pacing sags a bit when the narrative starts to turn more serious and sentimental. However, there’s a lot more going on with this ambitious offering than one might expect, especially in the laughs department. It’s quite a feat to take material that might ordinarily be considered crass and make it funny with a surprising degree of style and sophistication. Give this one a chance; you just may walk away with a sore funny bone.