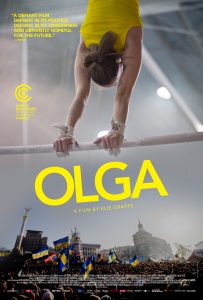 What’s one to do when caught between the fulfillment of personal achievement or taking a stand for a larger cause? What’s more, what’s one to do when the available choices are compounded by complications that make it difficult to decide and subsequently act? Such is the conundrum for a talented 15-year-old gymnast who’s the daughter of a Ukrainian mother and a Swiss father while she trains for the 2014 European Championships in Switzerland as the deadly Maidan Revolt rages in her homeland. Should she remain afar and continue with her training, or should she return to Ukraine to join the fight with her investigative journalist mother and activist best friend/former teammate? It’s a lot to consider for someone of any age, but, for a gifted adolescent, it’s an exceedingly exasperating choice, especially when she’s also forced to address the additional issues of jealous teammates, injury and deciding which country to devote her loyalty. Writer-director Elie Grappe’s debut feature walks a perilous, tension-filled tightrope in telling a taut, compelling story that successfully fuses the political thriller and sports drama genres, featuring a superb lead performance by former Ukrainian gymnast Anastasia Budiashkina. Admittedly, there are a few under-explained gaps in the narrative that detract from the flow of the story, and some of the atmospheric cinematography definitely could have been improved upon. However, when it comes to the elements that matter most, it’s easy to see how this offering captured the SACD Prize at the 2021 Cannes Critics’ Week and also earned nominations for the film festival’s Golden Camera Award and Critics’ Week Grand Prize. “Olga” may not have attracted a lot of attention in its initial theatrical release, but it should have and definitely deserves to now that it’s available for streaming. Give it a look – you won’t be disappointed.