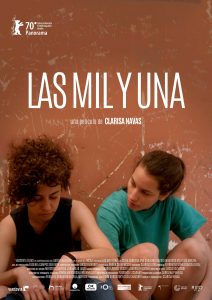 Coming of age is often a confusing time for anyone but especially for those who are unclear about their sexuality. Such is the case for a group of teens living in a run-down Argentine housing project called “the One Thousand,” particularly for an inexperienced 17-year-old girl who begins falling for a 20-year-old woman with a past and a reputation. While director Clarisa Navas’s second feature attempts to tells its story as “naturally” as possible, presenting its cast as “individuals” rather than “characters,” this approach unfortunately falls prey to an excess of extraneous material, including lengthy conversations about incidental subjects, pointlessly long lingering shots, and bloated cinema verité sequences of the protagonists engaged in mundane activities like walking, running or staring off into space. The result is an offering that frequently tries viewer patience, especially in the first hour. While the picture shows some signs of life in the second half, that’s not nearly enough to save this boring morass of a movie, one that’s been receiving undeservedly high praise for those who believe this is art when it is, in fact, unadulterated tedium.