‘One Night in Miami…’ 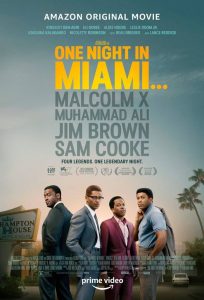 “One Night in Miami…”

Based on Kemp Powers’s play by the same name, filmmaker Regina King’s directorial debut about a historic 1964 meeting among activist Malcolm X, boxing great Cassius Clay, football star Jim Brown and singer-producer Sam Cooke on the night of Clay becoming world champ explores the state of the civil rights movement at the time and how each of them viewed its future and their role in it. This captivating look at the movement from the inside presents a balanced examination of the four friends’ views on the subject, including both their areas of concurrence and disagreement and how those pointed opinions had the potential to either tear them apart or bring them together. The excellent ensemble cast of Kingsley Ben-Adir, Eli Goree, Aldis Hodge and Leslie Odom Jr. enlivens the superbly penned screenplay, giving the picture a crackling intensity that’s tautly sustained throughout. And, despite a few stagey segments, this is arguably one of the best theatre-to-screen translations I’ve ever seen, effectively opening up the source material and giving it breathing room that such adaptations often lack. King has indeed produced a magnificent work here, handily serving up the right picture for our times, one that gives us all much to ponder in terms of where we are and where we go from here.