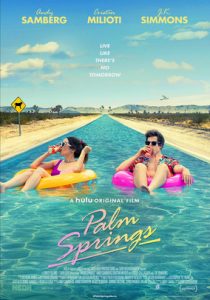 Never have I been as anxious to await a movie’s ending as I was while watching this waste of good celluloid. This truly awful “Groundhog Day” (1993) knock-off, mixed with elements of silly sex comedies, kitchen table metaphysics, lame self-help suggestions and stabs at the kind of obligatory insipid dramatic sequences typically found in cheesy rom-coms, lost my interest about 10 minutes in and never got it back during its torturously overlong 90-minute runtime. It’s truly astounding how this inane project ever got greenlighted and managed to attract performers like J.K. Simmons, June Squibb and Peter Gallagher (let alone capture multiple unearned awards season nominations), but I can honestly say that I never laughed once – not once – during this stupendously inept alleged comedy. The cloying, over-the-top performances of Andy Samberg and Cristin Milioti are headache-inducing and unenduringly annoying, making me wonder what anyone could possibly see in this cinematic monstrosity. If I could have given the film a lower score on Rotten Tomatoes (as I was able to on Metacritic), I would have. I implore you to avoid this mess at all costs.