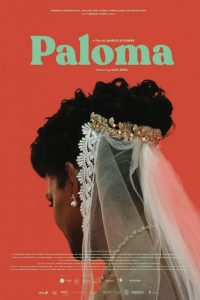 When a pre-op transexual woman announces that she wants to marry her boyfriend in a traditional Catholic church wedding, she’s called foolish and unrealistic for thinking that such a ceremony would be possible in the small, conservative rural Brazilian community where she lives. Even her loving beau thinks the idea is ludicrous and tries to discourage her from pursuing the idea. But Paloma’s determined to follow through on her plan, no matter what the cost, either financially or in terms of public reaction. In writer-director Marcelo Gomes’s latest, the filmmaker presents a fictionalized version of a fact-based story that has its genuinely moving moments of happiness and disappointment, though the narrative feels padded at times, incorporating incidents that don’t quite make sense and that, regrettably, bear out the concerns of those who tried to dissuade the would-be bride. “Paloma” has frequently been compared to another Latin American trans-oriented release, the Oscar-winning drama “A Fantastic Woman” (2017), though that film has it all over this production, one that tries hard to tell a compelling and convincing story but that ultimately comes up short.