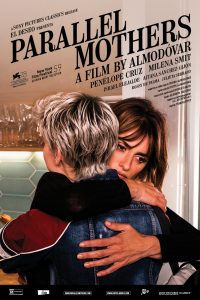 As I have stated previously on numerous occasions, I believe the worst sin a film can commit is predictability, and writer-director Pedro Almodóvar’s latest is hampered by this issue almost from the outset. After a sluggish and overlong opening sequence when the picture’s setup is being established, there isn’t one scene in this saga about two new mothers inextricably linked by their shared birth experiences that can’t be seen coming from a mile away. The soap operatic tone and swirling overdramatic music accompanying its alleged “revelations” come across like feeble attempts at compensating for this shortcoming, but they’re not enough to cover what can easily be seen from a distance. On top of this, the film’s attempt at pairing this story thread with another that’s almost entirely unrelated (save for some forced parallels involving ancestry and bloodline accuracy) makes for an especially odd mix (particularly since the secondary arc is actually more interesting than the first). Add to all that a wealth of needless padding brought on by excessive incidental dialogue and superfluous images, and you’ve got a movie that frequently drags in getting on with the story. In fact, about the only element that kept me invested in this release was the fine Oscar-nominated performance of Penélope Cruz, one of the few genuine assets this offering has going for it. Some have suggested that the director may be past his prime at this point in his career, and, based on this and his other two most recent works, “Julieta” (2016) and “Pain and Glory” (2019), I’d regrettably have to concur. This forgettable release is one that’s easily skipped.