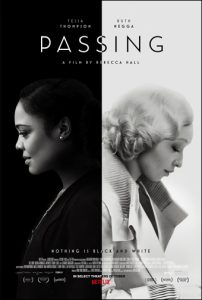 Trying to pass oneself off as something one is not can be a tricky – even dangerous – path to follow. But, at one time, it was a widely utilized practice in the African-American community, one in which light-skinned Blacks sought to be seen and accepted as Caucasian, believing that doing so would afford them benefits that their darker-skinned peers were fundamentally unable to avail themselves of. This was known as “passing,” and it’s the subject of director Rebecca Hall’s debut feature. The film, set in 1920s New York, tells the story of two old friends who have a chance meeting after a number of years apart. One has been passing for years, not even telling her White husband the truth about her ethnic background. The other, a resident of Harlem, could pass if she chose to but doesn’t, as she enjoys her life with her ebony-skinned husband and two sons. But, as they renew their friendship, the issue comes up for scrutiny on a number of occasions and in a number of ways, frequently leading them into some potentially problematic territory while simultaneously revealing that both they and others they know are all trying to “pass” in one way or another (and not necessarily where race is concerned). Eloquently and poetically shot in black and white, this fine offering gives viewers much to ponder where ethnicity, tolerance and integrity are concerned, all brought to life by the fine performances of Tessa Thompson, Ruth Negga, Andre Holland and Bill Camp. Several story threads feel a bit underdeveloped, but, on balance, this intriguing look at a challenging subject is sensitively handled, thought provoking and an excellent premiere effort from an aspiring filmmaker.