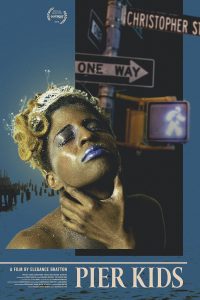 Surviving on the streets is a precarious, ongoing challenge for homeless youth, especially in the LGBTQ+ community, which makes up more than 50% of the street population and of which 40% are minorities, many of whom were abandoned by their families at a young age. They face a daily struggle of abuse, police harassment, health issues and having to engage in sex work just to keep themselves afloat financially. So it is for the youth of New York’s Christopher Street Pier, as chronicled in director Elegance Bratton’s unflinching debut feature. Through unedited cinema verité depictions of street life, the filmmaker candidly captures its troubling ways, as well as the efforts to build new and loving families not dependent on blood relations and the challenges associated with finding ways of successfully getting housed. The film, the latest installment in the PBS documentary series POV, indeed makes a powerful statement about the plight of this marginalized constituency, especially in its concluding sequences. However, despite its strengths, the film is also often hampered by sound and visual quality issues, an unfocused overall approach, and incessant bleeping of expletives, making for a rather choppy ride, particularly in its first half. As laudable as the production’s raw footage approach may be, this shortcoming grows tiresome, regardless of how up close and intimate it may be. This is compensated for somewhat as the narrative grows more focused, a change that no doubt helped this offering win the Independent Spirit Awards’ Truer Than Fiction Award. It’s unfortunate, though, that the film’s strengths aren’t sustained more consistently, which would have made it more deserving of the many accolades that have been bestowed upon it.