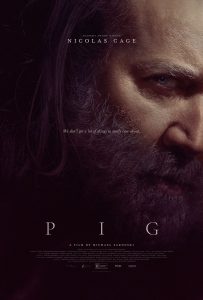 Despite its fine atmospheric cinematography and excellent performances, director Michael Sarnoski’s debut feature doesn’t serve up a story to match its ambiance and trappings. While watching this offering, I got the distinct feeling that I was being strung along, hoping that its cryptic unfolding would result in a satisfying payoff yet suspecting it wouldn’t live up to that promise – a suspicion that proved correct. In this story of a once-noteworthy chef who turns into a reclusive truffle hunter in the Oregon wilderness after a personal tragedy, we find a sad and lonely protagonist who becomes distraught when the only thing he truly cares about – his beloved pet foraging pig – is kidnapped. The incident prompts him to launch a committed search for the purloined porcine, one that necessitates a return to his Portland roots and his troubling past. Strangely obsessive and offbeat as the story may seem, it’s executed with a surprising degree of credibility, yet it never quite attains a level of engagement that would make viewers really want to care about what’s going on, cold as that may sound. It also attempts to wax philosophically on a number of occasions, though this aspect of the narrative, like the story line overall, nevertheless feels underdeveloped. Still, the film marks Nicolas Cage’s commendable return as an actor worth taking seriously, and it shows considerable potential for a new filmmaker. But, sadly, there’s not enough here to reach out and grab the audience’s attention to give them a vested interest in how it all turns out. Better luck to the director in bringing home the bacon next time out.