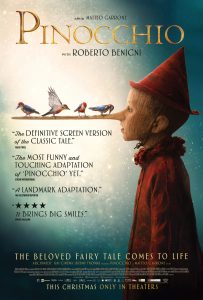 It’s hard to imagine how it’s possible to take a beloved children’s story and turn it into a tediously awful movie, yet that’s just what director Matteo Garrone has done with this tale of a puppet who dreams of becoming a real boy. This live action version of this classic yarn tries the patience of viewers to the point where one would likely sell one’s soul for a fast forward button. Every scene of this picture is far too long, often weighed down by repetitive dialogue and the incessant cloying of its title character. Tremendous emphasis is placed on the look of the picture, with costumes, sets, makeup and cinematography that truly are top shelf. But what it delivers in terms of visual aesthetics is undermined by a lack of warmth and a failure to introduce anything new to distinguish this take on the story from previous productions. As a consequence, the picture never engages the audience but instead serves up boredom that borders on torture. What’s more, the film is billed as family fare, yet its often-creepy imagery is unlikely to set well with younger viewers (that is, if they’re not already done in by the movie’s glacial pacing, a sure-fire way to turn off those with limited attention spans). I’m at a loss to figure out what the filmmakers were thinking here, but an exercise in high-brow production values is not the most effective approach to employ when it comes to telling a children’s story. It may look nice, but, with whimsical and heartwarming material like this, that’s not nearly enough.