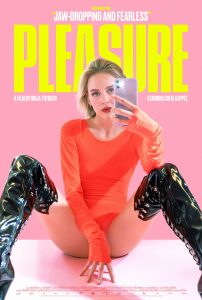 OK, so I’m prepared to be branded a clueless male when it comes to my assessment of writer-director Ninja Thyberg’s debut feature about women in the porn industry, but I’ll go on the record and out on a limb to say I just didn’t get much of what this offering is trying to say. As a treatise on the objectification and degradation of women in a male-dominated industry, yes, it makes that point loud and clear, with deliberate, unbridled justification. But it does so in a story involving a young protagonist who willingly leaves her home in Sweden and relocates to Los Angeles with the intent of wanting to become the next big female porn star. Doesn’t that scenario speak to an ambition that she voluntarily wishes to pursue? What’s more, she freely agrees to do challenging and shocking scenes involving violence and humiliation only to want to back out of them after starting to shoot. I can’t help but wonder, what did she expect going in to these projects? It’s as if she were utterly clueless, the personification of naïvete, making me wonder, how could she have possibly agreed to those terms if she didn’t have any idea of what she was getting herself into? It’s not that I don’t sympathize with her feelings, but her intention and reaction under these circumstances just don’t jibe for me, making me wonder what exactly did the filmmaker have in mind here, a question made all the more puzzling considering how the protagonist’s story ultimately plays out. Fault the writing here, given a haphazardly constructed story and screenplay, along with a lack of back story to explain how it all came together to begin with. Moreover, lead actress Sofia Kappel simply isn’t up to the task of carrying out the role, lacking the acting chops, charisma and (at the risk of being crass) looks to pull this off. And, in a story involving titillating subject matter, the simulated porn is itself, frankly, dull – not the least bit provocative, troubling or the slightest bit sexy but more disjointed, clinical and tedious. This one represents a missed opportunity to make some kind of meaningful statement, given that the central premise of its narrative is anything but groundbreaking, new or revelatory, just obvious. How this one captured a host of honors and nominations at film festivals and awards competitions is beyond me. Skip it.