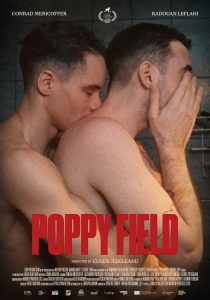 Based on actual events, this tale of a closeted Romanian policeman who is assigned to quell a protest by ultra-conservative fundamentalist Christian homophobes over a Bucharest movie theater’s screening of a gay film escalates in intensity when the officer is confronted by a former fling who’s attending the show. In a country where being openly gay is still uncommon, it’s difficult for those who work in prejudiced, über-macho professions to successfully retain their cover, as this uncomfortable protagonist knows all too well, a challenge made more difficult by the inflamed circumstances he now faces. This setup thus provides the makings of a confrontational scenario full of dramatic potential, especially given that this situation is unfolding on a weekend when the gendarme’s long-distance boyfriend is paying a visit. Unfortunately, first-time feature director Eugen Jebeleanu doesn’t tap into this rich vein of material as effectively as he might have. While the film presents the central conflict with a great degree of palpable realism, the script feels underdeveloped, with scenes that are somewhat repetitive and that fail to explore all of the narrative possibilities available. The same is true of the relationship story thread, which dominates the film’s opening act yet often feels more plodding than enlightening. And, to top it all off, the picture’s conclusion feels unresolved, conveying a sense of resignation that, while sadly realistic, nevertheless feels wholly unfulfilling. “Poppy Field” truly had a lot going for it going in, but, regrettably, the blossoming of this story ultimately feels arrested in mid-flower.