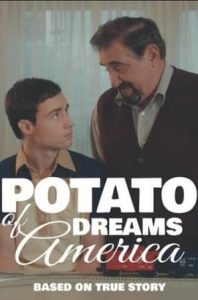 Imagine an episode of the original iteration of “The Wonder Years” (including one of its cast members) with a gay, Russian, Perestroika Era twist directed by flamboyant, colorfully whimsical filmmaker Wes Anderson, and you’ve got an idea what this autobiographical dark comedy is all about. Director Wes Hurley’s second feature playfully chronicles his often-challenging upbringing in the twilight of the Soviet Union and the hopes that “Potato” and his mother shared of immigrating to America to enjoy its many freedoms. That dream comes true when mom signs up to become a mailorder bride, enabling the duo to relocate to Seattle. Those hopes get put to the test, however, as the pair deals with an overbearing husband and stepfather who threatens to send them back to Russia if they disobey his wishes. That becomes an especially menacing threat as Potato tentatively wrestles with his emerging gay sexuality, a prospect new dad sees as wholly unacceptable, an attitude that the young man left Russia to escape. Told with an inventive mix of fantasy, realism, and an array of twists and turns, as well as the presence of a frequently clueless Jesus as Potato’s personal muse, this delightful offering is full of laughs and heartwarming moments but without becoming cheesy, overly sentimental, or, above all, predictable. The transitions in storytelling styles can be a bit jarring at times, but the overall mix blends well, serving up a delightful, funny and enjoyable time at the movies.