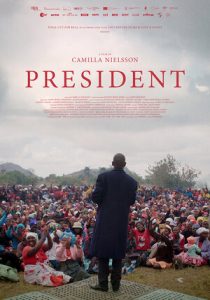 This impeccably detailed, though somewhat overlong, chronicle of Zimbabwe’s contentious and violent 2018 presidential election provides an inside look at a systemically corrupt regime that will do virtually anything to thwart reform and hold on to power, despite claims to the contrary. Director Camilla Nielsson’s excellent offering exposes a crooked government that grew out of a prior crooked government and has made a practice out of continuing its self-serving ways, policies that have been characterized by empty promises and the exploitation and endangerment of its own people. The film provides an up-close look at the populist campaign of a beloved opposition candidate in his attempt to unseat an unscrupulous incumbent and the incessant roadblocks thrown in his way by an autocratic ruler who pledges a fair and free election with no evidence to back up the claim. While the picture sheds light on the ways of what many would consider a third world nation, they nevertheless seem uncannily familiar to those of us who live in a nation where such practices are denounced and, all too often, denied. This release should thus serve as a wake-up call to all of those who profess to champion democracy even in instances where its presence may be noticeably questionable or lacking.