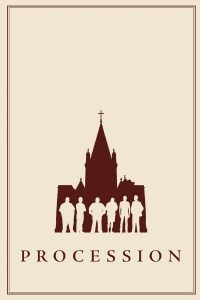 Sexual abuse of minors by Roman Catholic priests is undoubtedly a serious subject, and undertakings that address it deserve to be accorded due respect. One might even say that criticisms of such works are inherently bad form. However, for director Robert Greene’s documentary about the efforts of six abuse survivors to come to terms with this issue through drama therapy, the film’s uneven and somewhat disorganized treatment of its material tends to bog down the flow of their story. To a great degree, this is probably due to the picture’s attempt at examining far too much ground in the allotted time, occasionally making the narrative appear scattered and unfocused and giving short shrift to certain aspects. To its credit, the film’s dramatic re-creations of the survivors’ abuse incidents are moving, shocking and powerful, generating genuinely heartfelt emotions. In addition, a number of individual interview sequences reveal appalling details about the victimizers and the Church’s manipulative practices to avoid liability, most notably drawing upon statutes of limitation to skillfully evade prosecution. Indeed, the film makes a damningly strong case against the dangers of organized religion, particularly its ploys to fearfully manipulate and control parishioners, especially among the young, gullible and vulnerable. Yet it’s because of that, unfortunately, that this production fails to convey its message as clearly and effectively as it could have. A better attuned approach would have worked much better in making this the bombshell it might have been.