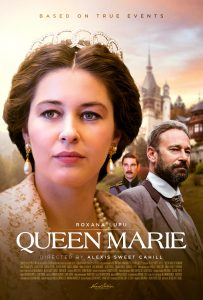 “Politics is a complicated business” is a theme that frequently surfaces and aptly pervades the narrative of this historical drama about the role that Queen Marie of Romania played in the challenging task of helping to reshape her war-torn country in the wake of World War I. Through this film, viewers witness how the strong-willed monarch determinedly changed the hearts and minds of indifferent American, French and British power brokers about the future of her country during the drafting of the Treaty of Versailles. While some elements of the story are admittedly underdeveloped, as are the nature and background of some of the film’s supporting characters, director Alexis Sweet Cahill’s latest nevertheless provides intriguing insights into a little-known historical saga and the life of a formidable, compassionate humanitarian who strived to improve the lot of a nation that wasn’t even her own birthplace. The superb lead performance by Roxana Lupu as the storied sovereign and the picture’s impeccable period piece production values make for an engaging watch, even for those who might not usually find such tales particularly captivating, one indeed fit for a queen.