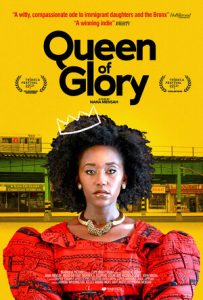 To paraphrase an old adage, you can take someone out of their native culture, but you can’t take the native culture out of that person. So it is for a young Ghanaian- doctoral student/scientist at Columbia University who has endeavored to become Americanized, distancing herself from what she sees as her folksy, homespun roots, including the attitudes and practices of many of her uber-Christian family members. She’s also made plans to move to Ohio with her boyfriend and start a brand new life of her own. All of those plans get sidetracked, however, by her mother’s sudden death, leaving her to sort out matters related to mom’s funeral and her estate, which includes her home and a business – a saccharin-encrusted Christian bookstore. Needless to say, this leaves the beleaguered protagonist in a pickle – does she follow her dreams or remain loyal to her roots (particularly when family members engage in more than a little less-than-subtle arm-twisting)? Actor-writer-director Nana Mensah’s delightfully wry comedy tickles the ribs with wickedly funny humor that many of us who come from overbearing families can readily appreciate, frequently with vibes reminiscent of films like “Shiva Baby” (2020), “Home for the Holidays” (1995) and “The Forty-Year-Old Version” (2020). And, for its efforts, “Queen of Glory” earned two 2021 Independent Spirit Award nominations for best first feature and the supporting performance of Meeko Gattuso as an ex-con bookstore employee, one of many colorful supporting players in the film. A few sequences feel a little drawn out, but this is a film with its heart – and funny bone – in the right place, making for an agreeably amusing watch.