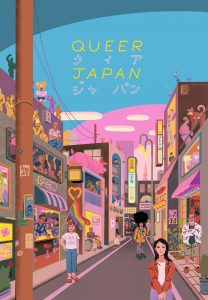 A colorful and flamboyant look at the burgeoning LGBTQ community in the Land of the Rising Sun, a long-sequestered segment of society that is now coming into its own in a big way and making a big statement in the process. The film’s panoramic scope features interviews with an array of out, proud and self-aware representatives of the community, speaking about their lives, loves and contributions to not only its own culture, but also to that of the nation at large. While the film tends to skew more toward the transgender segment of the community than others, it nevertheless provides an insightful look at a part of Japanese society that’s aggressively seeking to make a mark and to reform longstanding closed-minded viewpoints, especially in the areas of civil rights, politics and social acceptance. A bit more balance in the overall content would have made for a better documentary, but it’s an enlightening and entertaining view nonetheless.