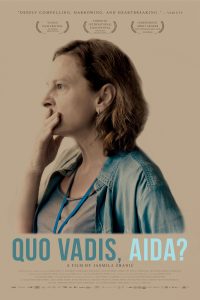 The Srebenica Massacre of 1995 was one of the most horrific incidents of the Bosnian War, and the chilling events that led up to it as it played out are presented in unsettling detail in this superb, if troubling, historical account. Told from the perspective of a UN interpreter who struggles to find safety for her family during the crisis, the film follows the ordeals of Muslim refugees fleeing the onslaught of merciless Serb militants and the United Nations’ inability and ineptitude in providing the protection promised them. Director Jasmila Zbanic’s latest puts viewers in the middle of the unfolding genocide, re-creating the horror and anguish experienced by those caught up in it without ever becoming graphic or gratuitous but nevertheless palpably unnerving. The excellent ensemble cast, led by the award-worthy performance of Jasna Djuricic as the desperate protagonist, sells this story so effectively that one can’t help but feel what the victims are going through. “Quo Vadis, Aida?” will undoubtedly leave audiences uncomfortable and heartbroken, but it brings to light the unspeakable atrocities that occurred during this conflict in hopes that we never experience them again.