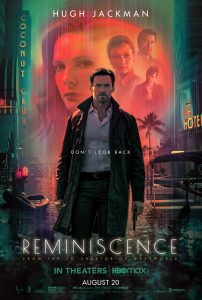 It’s truly disappointing when a film starts off with great potential but then squanders its viewer-earned goodwill as the story unfolds. So it is with director Lisa Joy’s debut feature, a future noir offering that mixes sci-fi, romance and mystery in a blend that draws from films like “Blade Runner,” “Brainstorm,” “Inception,” “Total Recall,” “Elysium” and “Déjà Vu.” In a war-ravaged, environmentally degraded version of Miami in which depressed residents escape their troubles by recalling cherished memories thanks to sophisticated mind-tapping technology, a former Navy interrogator who runs a business providing this service finds himself caught up in a steamy romance with a mysterious femme fatale who suddenly disappears without a trace. But, in his attempt to locate her, he unwittingly finds himself caught up in a web of drug trafficking and corruption, circumstances that he would have been better off leaving alone. It’s when the film turns from stylish romance to crime saga that the picture starts getting bogged down in too many plot tangents, underdeveloped story threads and conventionality, all of which undermine what this release had going for it at the outset. To be sure, the romantic and sci-fi elements of this story generally work well, but the more conventional aspects of the story intrude far too much, taking away from the overall viability of the production. The filmmaker shows promise with this debut, but future projects call for better judgment when it comes to determining what works and what doesn’t.